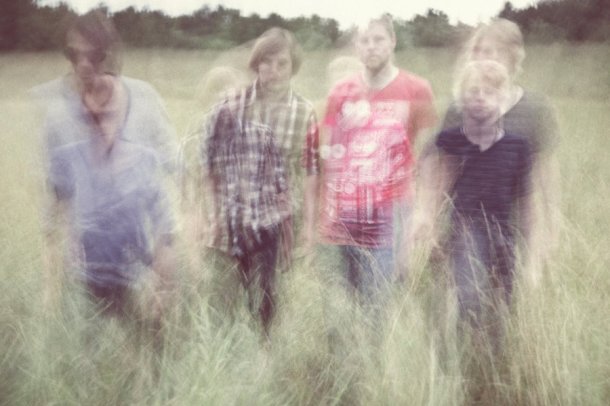 The debut full-length record from Delay Trees is one many will probably miss. With heavy hitters such as PJ Harvey, Death Cab For Cutie, Manchester Orchestra and My Morning Jacket releasing this year, smaller bands might end up more overlooked than ever. It’s a shame too, the self-titled drop from Delay Trees was a gem that was streamed by Spinner a couple weeks ago. I picked the right week to decide to listen to every record streaming at the time on the site. Few stood out, this was one. Delay Trees is resplendent and lush. And I know a lot of indie/alt-pop/rock records can be and are so often described this way. But where this sound is  too obviously deliberate, Delay Trees manages to come across completely organic. Delay Trees can be personal but never self-indulgent. No, these lyrics are more like storytelling. The instrumentation is merely a soundtrack at times. I wanted to know more about the band but couldn’t find much on them. So, naturally, I decided I needed to interview them myself.

How did Delay Trees form? How did you all meet?

I’ve played music with Lauri and Sami before Delay Trees and we’ve been friends for a long time. Onni is the little brother of a mutual friend of ours and seemed like a cool guy so we asked him to join the band.

While making the Soft Construction EP we just felt like we couldn’t create the debut album we were aiming for. In retrospect it’s good we left it that way. I mean it’s a really good introduction but it wouldn’t have worked as an album, the songs we ditched weren’t strong enough. I think all of the songs on the album, besides About Brothers and Tarantula/Holding On, were farely new when we started to rehearse for the album. I guess it’s quite important to try and keep things fresh before recording ‘cos you’ll definitely get bored with the album after you’ve toured for a while. We’re at that point right now… Planning new things and writing songs.

Some material sounds really autobiographical. Which is a great. It’s easier to relate to songs written this way. But in telling these stories through song do you ever feel exposed? If so, do you ever regret having written songs that make you feel this way?

I guess I would feel a bit exposed if I had to explain the lyrics in detail but now it’s just there, inside the songs with the music and it feels great to be able to sing about something that truly means something to you. I do write lyrics that aren’t that personal too, but even though it sounds like a cliché, I think that when you add even a little bit of yourself in the songs it can make your music so much more meaningful for everyone.

What is the music scene like in Finland? Was it hard to build a local following there once the band started performing?

The scene is really small, you basically know everyone and you end up playing with the same bands night after night. But I’d say we have a pretty vibrant music scene in Finland, considering that there’s only 5 million people in Finland and dozens of really interesting bands and artists . Unfortunately most of the bands you’ll never hear about because our music export is still pretty much learning how to really promote Finnish music and  also geographically Finland isn’t the best place to start taking over the world. Unless Russia is the world.
We’ve seen a slow but steady growth from 8 people to some small-scale sold-out shows within the past two years. But at the start it was somewhat difficult, but it always is for new bands, so no complaints, we’re happy just playing shows.

Your new video for “About Brothers” was originally an idea the director had for a short film about his brother (who stars in the video). How did his idea become your new video?

Teemu Erämaa (the director of the video) is a friend of our bass player Sami. After hearing the song and that we’re looking for someone to make a video for it, we talked about the possibility of working together. It took a long time but it’s definitely worth it, the video is gorgeous!

What are some of your biggest musical influences?

Velvet Underground, David Bowie and Pink Floyd have been our favourites since the beginning. However I think the likes of Slowdive, Low, Blonde Redhead, Spiritualized and Julee Cruise have influenced our sound much more.

What are some of your contemporary favorites?

I know that we all loved (like the rest of the planet) the latest Beach House record. Me and Onni are huge Deerhunter and Ariel Pink fans. I think this year’s best albums so far have been made by Destroyer and Panda Bear, but I’m  really looking forward to the new Bon Iver record. I used to follow music blogs quite enthusiastically few years back but I’m nowadays listening more oldies stuff so I’m afraid I may have missed some great records within these past few years.

Road Scenario: You’ve done soundcheck and now have a few hours before your set starts. No photo shoots and no press to be done. What do you do to kill time?

We’re probably taking a walk around town just to see something and experience more than the boring backstage. But if we’re stuck backstage, we’re probably watching awful music videos on youtube, eating some snacks and maybe pulling some practical jokes on each other. Sami is probably on Facebook, he seems to be always online. So pretty much the usual, boring backstage stuff.